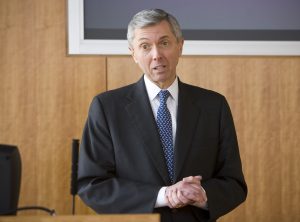 Recently retired President of ExxonMobil Chemical Company, Steve Pryor gave students the “big picture” on the world’s energy outlook over the next few decades. To begin, he emphasized that energy underpins all economic growth. As a result, the countries that will see the most growth in terms of energy usage will be the countries that are growing at the fastest rate, the non-OECD countries. With an increase in energy production the world will see an increased amount of carbon dioxide (CO2) emitted into the atmosphere. According to Pryor, entrepreneurs will have to find a way to capture all of our emissions, especially in places that are seeing unprecedented amounts of growth like China and India.

The economy is growing, but what is causing the increase in demand for energy? According to Pryor, the increased demand is due to the world’s population increasing at the same time that standards of living are improving for millions of people each year. In fact, the world’s middle class will double in size within the next 50 years. This presents large companies like Exxon with a challenge: how do they provide energy that is reliable and affordable and address issues regarding climate change? In the eyes of Steve Pryor, the answer is natural gas. Pryor presented a case study to show that the United States has reduced CO2 emissions by more than 20% in the last ten years because of the heavy investment in hydraulic fracturing. On the other hand, Germany has forced heavy regulation and large amounts of taxpayer’s money into renewable sources of energy like wind and solar, but has seen only a 10% reduction in CO2 emissions in the last ten years. Steve Pryor emphasized the importance of allowing the market to do what it does best, allocating resources accordingly, and finding the most efficient outcome. He does not support the idea of carbon credits, but does support the idea of a carbon tax in which individual consumers are taxed based upon their consumption of energy because this would lead to even more innovation and prudent use of energy. Steve Pryor was an informative speaker and very clearly showed devotion to making energy cleaner, cheaper, and more widely available.

Our Pulse Our People